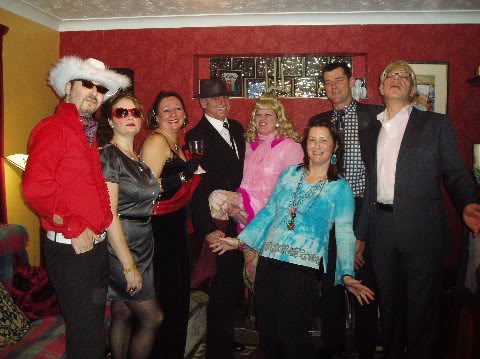 I won't tell you who did it, just in case you do this one yourselves, the costumes were terrific, the girl in the pink dress had made it herself, with marabou trim, fantastic tights, falsh eyelashes and that wig which the boys all tried on at the end of the evening. Kitty's eyelashes were even longer, like ski ramps. My bro was disappointed as a fedora he's ordered from ebay hadn't arrived, although it had been dispatched in time, he got a loud shirt form a charity shop, but the best shirt award had to go to Terence, who had a red frilled front and cuff affair, he even kept the sun glasses on despite the candle light.

Myself and DH; Mary-Jane and Champagne Charlie
] 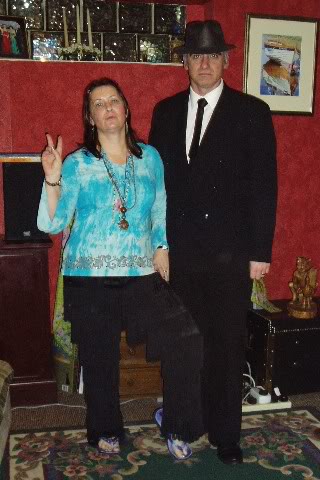 The amazing trousers, swing those pants!
] 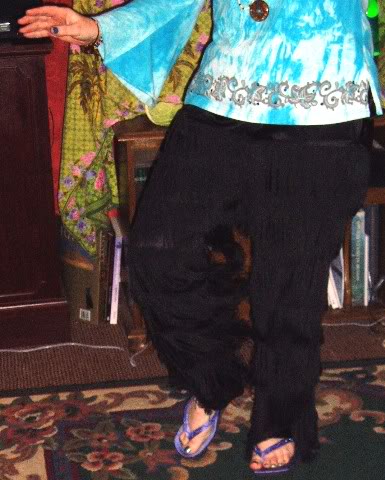 I put the bombay mix and nuts in cabbage leaves as bowls to fit the 60's theme, we used one of DD's school project (Andy Warhol style) to cover up the victorian style fireplace, pity it was Bart Simpson, but hey man, we're cool. We also borrowed DS2's lava lamp.

It was such a laugh, I'd forgotten how much fun these evenings are.

Oh it does look such fun - and so good that everyone really joined in the spirit of the thing too. Love those trousers!!

What a fabulous party - looks great fun and shall look forward to seeing the
LO when it's done.

it all loks such fun karelyn ,i dont know if i could relax enought o get into the spirit of it all though ,i reckon id have to be pi***d first

wow that looks like fun. my mum often has these type of parties and they always have a good time.
looking forward to seeing the LO Karelyn.

Looks like you had a great time, Karelyn.
Smashing pics.

Excellent Karelyn there's some smashing costumes there, these parties sounds fun though I haven't a clue how they work, I'd love to know as it sounds like something I'd like to have.

We pick up the games at car boots or charity shops, they are usually £15+ in toy shops. The new ones have cd's with them, the older ones have tapes. There are instructions for the hosts inside and the number of guest is on the box, with the theme. The murder has usually happened a few hours ago and all the guests are suspects.
The invitations give a brief outline of the characters and suggestions for costumes (I usually let the other guests know who is playying each part too). The invites need to go out at least a month before, so that people can get costumes together, and it really is important that people are willing to join in and play the character.
This one had scripts for each character, also things that we should reveal on each round, or only reveal if challenged.
It starts with each character introducing themselves as per the booklet (you don't have to make it up) and you continue with a bit of the tape/cd on which a detective gives a bit of input, then food and reading from your booklet. Other characters may ask you questions, which you haven't been given the answers to, so you do have to do a bit of guess work there and try to be convincing.
There are suggested recipes and ideas to help set the scene, and instructions of what to do when.
Sometimes the murderer finds out at the beginning that they did it, and other times they don't know themslelves until reading it in the last round. At the end everyone has a guess about who did it, then the tape/cd confirms who the murderer was and usually why.
If you get one pre-owned do check that there is everything you need in it, there will be a list in there somewhere, in the planning booklet or similar. We have found that you will probably have some invitations as when you invite couples they don't need one each, so there will be some in the box. I have also written to one of the manufacturers and bought extra invites, for something like £1.50 I think. You can copy them as long as you have one though. (did I say that?).
There are 2 or 3 firms make them and there are often twists in the tale, you might turn up with someone you're married to and find that you're married to someone else, but secretly seeing another guest too. It is a laugh and if you have someone who can do an accent and keep it up so much the better. There is usually one person who keeps getting it muddled which is also hilarious and more often than not they turn out to be a drunk or a bimbo as a character too.
My brother kept trying to be bossy and tell us how to play this one and I had to tell him off, at the end he revealed that his character instructions had said to behave as badly as possible LOL
at the first one we did my dad was falling asleep at the table and his character was a mad balloonist who had had an accident, so he was doing well atually when we kept nudging him to join in and he burbled through his script.

i have a game, i must look it out and see which one it is, we haven't even opened it yet ..

I like this idea, I think I'll plan one of these for a few months time, it would be a laugh and I can think of a few people who'd enjoy it.
Thanks for the explanation, I'll let you know when we do it.

Sounds like great fun and you look fab. I have never played one of these games either.

does bobs and tim do these murder mystery things as well .

They do sound like fun though ,and a heck of a lot of planning goes into them . i did nto realise that so much was included in the games and that you were given characteristics to play act as well . your stories about your bro and your dad made me laugh ,you telling them off and they were " in character"

I'd love to do one of these. I would love a weekend.