hi girls,
i was wondering if anyone liked the idea of a meet up somehow during the year in addition to the retreat,
i dont get on here much i know but wd love to meet some of you,maybe a nights stay somewhere and a meal and drinks,something that would be alot cheaper as i dont think im going to be able to afford to go on the retreat.
but i would also need someone who i could go with,
dont worry if you dont think its a good idea then thats ok just thought id suggest the idea.
something that wd maybe be just the cost of petrol and one nights stay somewhere really cheap but nice!!!and then just money for meal and drinks ect.
i know some places are now doing night stays as cheap as £25 a night.but cant remember who it was. 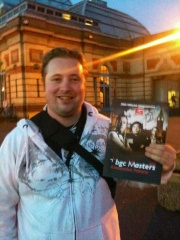 i would love to meet up Richard...sounds like a good idea, i will pm you later

thankyou :-))
unfortunatly i think im the only one in the south of england i think :-(
which makes things tricky not being well and not a driver either.xxx

I'm in the South (Oxford) but unortunately my disabilities get
worse and not better so it's a struggle for me to go anywhere.

I'd love to meet you, so if you are ever this way, I would love
you to come and visit me.

Hey! I have a yet to be used tent! So as olong as you have a garden for me to pitch it in....... I could really visit anyone!

Your the only one in London Richard now, but there are a few of us in the south, not as many as up north.

There is another 'young lady' near you richard...well according to the map she is near you (Billie is that right?)

Hey! I offerd to come and put my tent up in your garden!........ And don't mind getting a train...... Will have to sort something out mate, cos I keep threatening to come and see ya!